Credits: With the support of C.C. Can Felipa Descriptive text: I made this video at the beginning of 2019. The previous year I had been on a scholarship thanks to European research grants at a Spanish university, but it turned out that these research contracts were nothing more than a way of covering up youth unemployment rates and that our superiors didn’t have much work for us. So after more than six months with nothing to do but with a good salary, I decided to stop wasting my time and leave my job to do an artistic residency. A year later, and after experiencing many precarious situations, I returned to make the precisely opposite move: to go undercover for a day as just another worker, and work without being paid. In this occupational adventure, I managed to get my passwords reactivated on the virtual platform and be registered in the internal system so that I could be recognized as a worker, all of which was recorded thanks to a “bottle of water” spy camera that I bought on the internet. Most of the staff who appear in this video, recorded in the style of a “Research Team” TV program, are workers who show us their strategies for not working or pretending to work. Thus, certain strategies for resisting work are revealed, ranging from the conscious struggle against a system that imposes results without taking into account working conditions, to forms of survival linked to the body’s natural responses to work. Thesis students with unpaid teaching tasks, subcontracted cleaning staff or scholarship holders who struggle not to be seen as objects, are the protagonists of this experimental piece that was recorded with precarious means, since all of these bodies are situated in a place of precarity that they confront with their own tools.

Who Built the Seven Gates of Thebes? 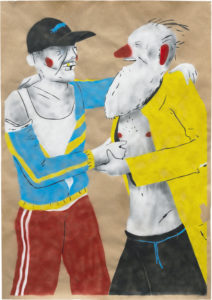 Descriptive text: Ignacio García Sánchez’s work interweaves different artistic languages and traditions to reflect on historical, political and social issues through the creation and research of utopian and critical scenarios that raise questions about the prevailing system of life. The contradictions between theory and practice and the decisive influence of abstract ideas in the processes of social transformation are the basis of his work. For this exhibition, a group of his works from different projects produced between 2010 and 2018 have been selected, all of which deal with the concept of work, considering not only those who work and live from their labour activity but also of those who are on the fringes of the system. Hence the choice of the title of the project, Who Built Thebes of the Seven Gates?, a line from Bertolt Brecht’s poem “A Worker Reads History”, alluding to the anonymous architects of the “great achievements” of history. As a way of formalising, Ignacio García Sánchez is interested in the manual handling of materials (often fragile, precarious, or dispersed) that contain a powerful symbolic charge and are re-signified. To the classical disciplines of the Fine Arts he incorporates influences from the so-called “minor” or applied arts: educational illustrations, popular crafts, political propaganda, as well as archaeological or social anthropological simulations. On occasions, he develops sets of handmade replicas of cultural products from future societies, or societies parallel to our own, which introduce us to anachronistic universes from which we can project potential futures. It is also from this critical stance with linear history that pieces from different periods of his career are put in dialogue.

The Best Job in the World

Format: Wall installation of text prints on A4 paper and pushpins.

Courtesy of the artist and The Goma gallery. 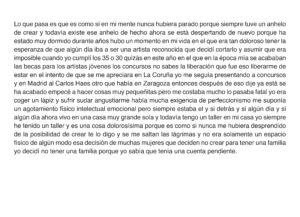 Descriptive text: The installation presents the transcription of a series of conversations that Cristina Garrido held with sixteen artists from different Spanish territories and generations (born from 1964 to 1984) who have all retired from the production or public life of art. Through these conversations, we are offered first-hand knowledge of a partial genealogy of Spanish art that has not been recorded in books, which may give us some clues to help us read the current panorama more clearly. There is a question that is often hidden when we talk about art and artists. The history of art brings us testimonies of artists that are associated with a certain degree of success, creators whose hard work and years of suffering has paid off in the form of recognition. The story of the struggling artist is seductive and seen as heroic, but it also serves to hide the reality of the majority of people who are forced to give up trying and opt for a better life. Art schools, the first art institutions, promote myths and romantic beliefs that generate blindness and confusion in young people. In their early years of training, artists are taught that the only criteria for assessing their work will be talent, hard work and luck, but after about ten years of dedication to the medium, many artists find that, while having some of these attributes, they lack others that are much more important in order to be able to pursue art professionally. A person’s social class, gender, geographical origin and psychology dramatically influence their history and their possibilities of developing a long-term artistic career.

Descriptive text: Online Shop is the continuation of a project that deals with the intrusiveness of online shopping and sales platforms. For its first version, I trolled the big online sales portals such as Amazon and AliExpress, introducing noise with images of artworks through their user review tools, which allow users to give their opinion about the products using photos, videos and text. For this edition, I want to add a new section to this intrusive project. On this occasion I am going to incorporate artistic contents in well-known online second-hand buying and selling platforms, such as Milanuncios, Todocolección, Wallapop and Vinted. These channels, which are unusual in the high culture market, will serve as online shops to advertise several of my creations for sale, many of which will also be exhibited in the gallery. 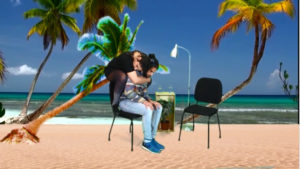 Descriptive text: In the period from 2013 to 2015, we conducted interviews with different emerging agents with whom we coincide in residencies, exhibitions or scholarships in which we participate as artists. The questions were always the same and they tried to generate a contextual and generational framework about the legitimation processes towards a supposed professionalization in the artistic sector. With fragments of the different responses obtained, about fears, fantasies, insecurities or contradictions, we generate a first-person account, thus obtaining a portrait of the current situation of emerging agents in Spain. The result is a video action where an interview is simulated, with the same questions that were asked to all the agents for two years. The interviewer exerts a series of ironic actions on the interviewee in relation to her answers, while he remains passive without putting up any type of resistance. The interview takes place in a false paradise, a crudely retouched set, alluding to the search for a non-existent paradise that all emerging agents yearn to reach.

In addition, in the opening will have the collaboration of AMA OREA – ogi ekologikoa.