Performance Duros a cuatro pesetas by Oriol Vilanova.
May 21 and 28 at 6:00 p.m. in the Chillida Hall of Bizkaia Aretoa, by Gari Arambarri and Javier R. Pérez-Curiel. Free entry until complete seats.

This performance was first presented at the Musée de la Monaie in Paris in 2012. It is a very simple gesture: to subvert the idea of profit that is intrinsic to any kind of economic transition. It is an absurd motion that comes from a Spanish saying, “Nadie da duros a cuatro pesetas” [Nobody gives a penny for a nickel], meaning that you should be suspicious when someone offers you something too good to be true or too valuable to be real. The idea of cheating is very present in Spanish culture. There is a literary character from 17th century literature, the “pícaro” [a rascal or swindler], a very poor young man who constantly tries to deceive his employer with little tricks to escape his miserable condition. This figure of the rogue has often been associated with Latin idiosyncrasies. There is something absurd but also productive in subverting the profit motive. One resists both the economy and capitalism. 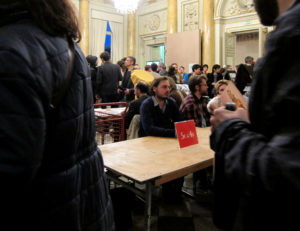